On Saturday 26th January 2019, the board of our non-profit organization visited Thil, a small French town located some eight kilometers from Esch-sur-Alzette, with twelve student members of our association to visit the site where in the years 1943-44 the Germans built a concentration camp. 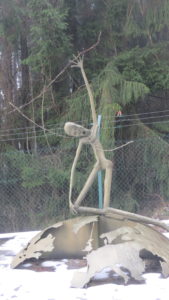 On the path of remembrance which leads from the parking to the crypt, you can see various sculptures representing mankind martyrized by the camp’s barbarity. In the crypt Mr. Gino Bertacco, Thil’s deputy mayor, explained the reasons why the Germans built this camp in 1943 and why it was abandoned in September 1944.
Afterwards we visited the Tiercelet mine (opened from 1885 to 1945). Mr. Daniel Pascolini told us how the camp’s prisoners came to work here every day alongside female soviet prisoners. Their forced labor was destined to build the various components of the V-1 flying bomb.

Sculptures and the Memorial Crypt

We started walking up the crypt from the parking on the path of remembrance. On the way there we listened to the explanations of the deputy mayor who detailed all the evidence proving the existence of the now largely forgotten camp. Starting in the seventies of the 20th century several works of art, depicting the barbarity which occurred on this grounds, have been placed along the way.

In front of the crypt Mr. Bertacco and Mr. Morello explained how construction of the camp started in early 1943. Its design and layout hid it from the surrounding population’s sight. The Germans abruptly abandoned the site in September 1944 when the American forces approached the city of Longwy. During the German occupation of the area, the French citizens of Thil found refuge in the Gironde region, while the inhabitants of Italian descent stayed on site. A lot of Italians worked in the mine alongside the prisoners. A lot of the French people’s homes where looted in their absence. When these people came back from the Gironde after Thil’s liberation, they went to the camp and took everything made out of wood. They used the wood to heat themselves after the war. This is the main reason for the lack of physical remains of the camp. Only two steel posts were found which can now be seen near the entry of the crypt. This is also where you can see an impressive sculpture of a man trapped in barbed wire, he may be trying to get up and escape or be dropping to the ground in exhaustion. This sculpture is the creation of students of the Lycée Jean Macé in Villerupt who donated this piece of art to the site in 1978.

The captives who died in the camp or in the mine were burnt outside the entry of the mine. Petroleum was used to set the bodies on fire. The air stream coming out of the mine kept the flames ablaze. The stench of this procedure could be smelt in the distance. This is why Eugen Walter Büttner, the commanding Nazi officer, requested the bodies to be burnt on bundles of wood on the hill near the camp. A white cross behind the crypt indicates the spot where this happened. But as the stench was still noticeable in the area around, the commanding officer requisitioned an oven from Villerupt’s slaughterhouse. The oven’s original purpose was to burn unusable remains of animals. It was installed near the spot where originally the corpses were burnt. According to the deputy mayor not more than two or three prisoners were burnt in the oven as the American forces were advancing from the west.
Inside of the crypt, Mr. Bertacco explained to us the layout of the camp using a scale model created with the means of aerial pictures taken by the allied forces. On one side of the camp there were the living quarters of the Germans, on the other there were eight barracks. Each barrack accommodated up to 100 prisoners each. The numbers were regularly checked. Each morning the prisoners had to carry a rock to the mine and back to the barracks at night. A drawing done by a former captive shows the prisoners dressed in clothes with grey stripes walking to the mine and carrying a stone. After the war a Luxembourger who was detained at the camp donated his original uniform a museum . This uniform is exhibited in the crypt.

The camp’s prisoners were mainly trained workers like electricians, machinists, fitter-assemblers, turners etc. Their job was to turn the mine into a production area for the German V-1 flying bomb. At the death of a prisoner, the camp’s SS commander Büttner, had the deceased replaced by a captive from the camp in Natzweiler-Struthof in Alsace.

After the visit of the crypt we drove to the entrance of the Tiercelet mine in Thil where the camp’s prisoners went every day to work alongside the Soviet female prisoners of the nearby camp in Errouville (F). We were greeted by Mr. Daniel Pascolini, who was in charge for our visit alongside Alain Fioritti, Dominique Thénière and Brice Morello, a group of volunteers working to preserve the memory of the historical importance of the mine. They led us through the part of the mine which is accessible to the public.
At the entrance of the mine two commemorative plates, one in French, the other in Russian, commemorate the soviet female prisoners who died in the mine as they were forced to work for the Nazi war machine. Their remains were left under the rocks which killed them.

Equipped with safety helmets we were directed into the mine. The volunteers explained the work the prisoners had to do. Various objects found in the mine are shown along the way. They serve as silent witnesses for the presence of the prisoners from both camps and the SS guards (SS is short for Schutzstaffel, an elite Nazi group) of the Todt organization (a civil and military engineering organization in Nazi Germany).
In the mine we saw a place where a rockslide had happened. On top of the rocks we saw an orthodox cross. Mr. Pascolini explained that at this very location 27 Soviet women were buried alive in a tragic accident while they were building concrete walls to stabilize the area. Their bodies have never been extricated and are still buried under the rocks which claimed their lives. A cement mixer of the German firm Regulus was found deep down in the mine and dragged out.
Not one V-1 flying bomb has ever been assembled in the mine although some parts were built on the site. We couldn’t visit the underground workshops situated deep inside the mine. This part of the mine has not been secured nor marked out yet and is therefore closed to the general public.