On the 17th and 18th of December 2019 our association “Ad pacem” organized a cultural and educational trip to Alsace. Together with three teachers, twenty-five pupils from the Lycée de Garçons in Esch-sur-Alzette (Luxembourg) visited the Natzweiler-Struthof concentration camp, the Alsace Moselle Memorial in Schirmeck and the European Parliament in Strasbourg.

Visit of the concentration camp

Twenty-five pupils from the Lycée de Garçons d’Esch-sur-Alzette undertook an educational trip to Alsace on 17 December, accompanied by three teachers, Mr Claude Pantaleoni, Mr Christian Welter and Mrs Dora Almeida.
The first stop was a visit to the former Nazi concentration camp of Natzweiler-Struthof south of Strasbourg, where we arrived by bus at about 10.30 am. The whole site is a “national necropolis” where 22,000 people, mostly political deportees and resistance fighters, were murdered because of their opposition to the Nazi system. Many of approximately 400 Luxembourgers who were interned there also lost their lives. 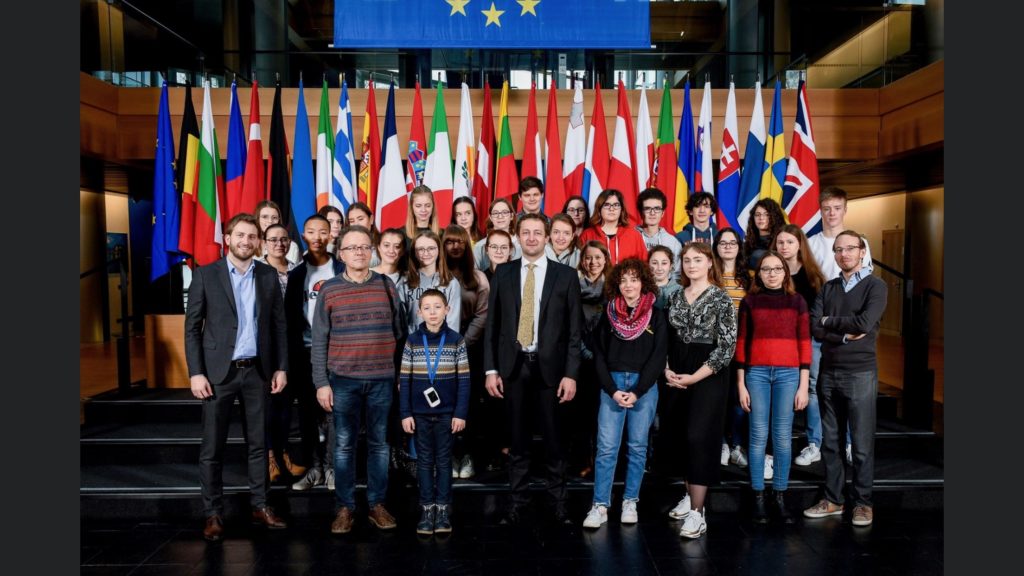 We started the visit with the screening of a documentary film in a room of the museum, near the entrance of the camp. This gave us an overview of the history of the camp from its creation (first built by the Nazis to extract pink granite rocks for the monuments that Nazi architecture wanted to bring to the construction of German cities) until its liberation by the Allies. In the basement we visited an exhibition of photos of the war in relation to the concentration camp world of Nazi Germany.

Then the whole group visited the camp site, more precisely the land around the terraces where the barracks were once located. After the war, some of the barracks were kept as they were so that visitors could get an idea of what they were like and see, among other things, rooms where medical experiments were carried out on prisoners.
During our visit the temperature was quite cool (a few degrees above zero), which made us understand why the climate, especially in winter, with rain, snow and cold winds, was, along with the lack of food, the worst enemy of the prisoners who wore clothes that protected them very badly on this Vosges high plateau when it was not hot.
From 1942 onwards, the Gestapo established its headquarters at Struthof and the camp motto became “extermination through labour”, making Natzweiler one of the hardest camps to bear. Survival became increasingly difficult.
In the middle of the camp you can still see a gallows where many prisoners were hanged after official Gestapo judgements. They were hanged there for several days to deter any escape or rebellion.
The largest group of prisoners in the Natzweiler-Struthof concentration camp were Poles (about one third), followed by Soviet prisoners (a quarter) and the French (about 14%). Of the approximately 400 Luxembourgers who passed through this concentration camp, 29 died in this camp or in a camp dependent on Natzweiler; 26 died in other camps after having been interned for some time in the Struthof camp.
The darkest day for Luxembourgers was 19 May 1944, when seven Luxembourgers were executed there. Taken prisoner by the Gestapo on 12 February in Les Ancises, in Clermont-Ferrand and its surroundings, they were transported to the Natweiler camp for execution. Their ashes were recovered in secret after being taken out of the crematorium by Luxembourger Roger Wagener, also a prisoner at the camp. He hid them in the floor of a hut from which they were removed after the liberation of the camp and buried in Differdange cemetery on 6 August 1945.

Visit of the Alsace Moselle Memorial

In the afternoon the group visited the Alsace Moselle Memorial in Schirmeck, where the special history of the Alsatians and Moselle people who changed their nationality 4 times between 1870 and 1945 is revealed. In 1870 this territory became German and remained so until the end of the First World War when it became French again.
From 1940 to 1945, Alsace and Moselle were the only parts of the French territory to be annexed by the Third Reich and to experience the violence of the Nazi regime.
1945 marked the end of the conflicts in Europe and the will to build a lasting peace with the constitution of the Europe of the six nations that make up the European Economic Community. It is the nucleus of what in the second part of the 20th century will become the European Union with today 28 countries. All this European adventure is presented in this Memorial.
A very competent guide has given us the necessary explanations to understand the different settings, documents, films, testimonies and games.
From this reality experienced by Alsace and Moselle, we can better understand the meaning and the validity of the European construction, of a common life of the European populations.
The visit ended around 4.30 pm and we left for the centre of Strasbourg to visit the various Christmas markets in the centre of the city. Around 7pm everyone got back on the bus to go to the youth hostel in Saverne. The evening ended in the restaurant La Marne, where we tasted specialities of the Alsatian cuisine (tartes flambées, etc.).

Visit of the European Parliament

On Wednesday 18 December, the first day of holiday for the students, after breakfast at the hostel, they went by bus to the European Parliament in Strasbourg where they were welcomed by Mr Alex Donnersbach, secretary to Luxembourg MEP Christophe Hansen. He was our guide throughout this discovery visit of this important European institution.
The group began by attending a live series of votes in the plenary chamber which brings together the 751 MEPs (including British MEPs).
After that, Mr Christophe Hansen received us in a separate room to explain the workings of the European Parliament and the work he himself does as a Member of the European Parliament. The young people also had the opportunity to ask any questions they wanted. They got clear answers from the MEP who gave explanations supplemented by many concrete examples. A good part of the time was dedicated to the burning questions that the students had about the ongoing climate change. To everyone’s surprise, Mr Hansen revealed that the European Parliament receives only 1% of all national budgets of the EU Member States. This is not enough to accelerate and intensify European integration, especially in cultural and environmental terms.
The group was then invited to have a good lunch with Mr Hansen and Mr Donnersbach inside the Parliament. The discussion continued at the table. After lunch, the Luxembourg MEP took leave of the group while expressing his satisfaction with the visit and his confidence in these young people open to Europe.
For the next two hours, the students took part in a simulation of the political and decision-making activity of the political groups represented in the European Parliament. They were divided into four groups representing the major European parties currently represented in the Parliament. Within each group the task was then to promote and support the voting of two bills. But in order to achieve this, it was necessary to change, by arguing, the own proposals so that majorities could be achieved. This proved to be more difficult than expected, because it was a question of making compromises with other parties in order to obtain the majorities necessary to get the bills accepted. This is a good example of how difficult it can be to reach agreement for the 751 MEPs.
At around 5pm we said goodbye to Mr Donnersbach and the European Parliament and were back in Esch-sur-Alzette at around 8pm.